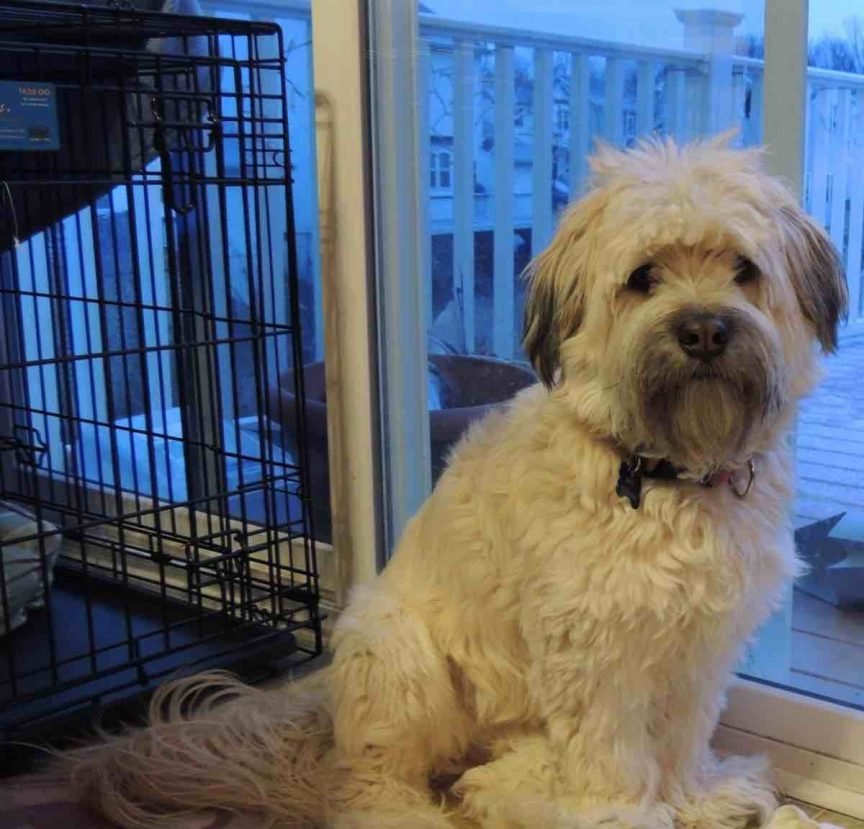 So your dog hates his crate all of a sudden and you don’t know what to do? Don’t worry, in most cases this is either a phase that will pass or you’ll be able to train it again with some patience.

Once you found out what’s the probable cause, I’ll show you how to start fixing his aversion.

Reasons your dog hates his crate all of a sudden

Dogs love routine. And they can quickly get stressed if something changes. Have you placed the crate in a different spot? Have you washed his pillow or blanket? This makes if fresh for you but also unfamiliar for his nose.

If you’ve changed anything recently, change it back to when it still worked. You can also try to always leave something in there that he likes, like his plush toy, that you never wash. So it always has that familiar smell.

I know, it’s tempting to crate your pup when he’s been nasty. The problem is that with repetitive crating as a punishment, your dog will start to have negative associations. So he starts to see his crate as a bad, uncomfortable place while you actually want him to love his crate as a sleeping and relaxation cave.

Negative association asks for counter conditioning. You have to teach your dog to love his crate again. This can mean that you have to start crate training all over again. But not necessarily. You have to find your dog’s trigger spot. Does he still usually go inside by himself but doesn’t like it when you close the door? Then you can start there. Or does he avoid it all together? In that case you have to start from ground zero with some yummy treats. 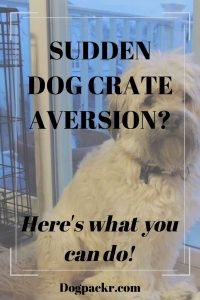 How much time does your pup spend inside his kennel? A few hours per day? Have you been really busy lately and had to increase his daily kennel time? If this is the case, your doggo is probably bored and has had enough. It’s similar to or actually combined with bad association, he’s feeling uncomfortable inside his crate and hence doesn’t wanna go inside anymore. It’s like if you hate your job and it’s super boring. You feel imprisoned and you hate to even think about it. That’s probably how Fido’s feeling.

As explained in this post, dogs sleep a lot during a day! So it’s perfectly fine to leave your pupper in his crate for several hours if he’s actually tired. For instance, I think it’s no problem crating him for 6 to 8 hours if he had a 2-hour walk before that. The point is that he’ll have to sleep for about 8 hours at night as well. So in between you would have to dedicate a good chunk of your time to your furry friend. Otherwise he’ll likely feel lonely and neglected. Dogs are very social beings. So apart from exercise, they also need interactions with their beloved humans.

If you don’t have the time to take two 2-hour walks per day plus include another hour of playing and cuddling in the evening, then I suggest you find another solution where your dog can relax during the day. The best solution is a room where he can’t destroy much. In my case it’s the kitchen. This allows your doggo to have more space to stretch out. On the other hand it’s a confined space so he doesn’t feel the urge to protect the whole house. Then you can still crate him at night which allows for a little more variety.

If you’re crating your dog while your home, try to limit it to 1 or 2 hours at a time. Being such a social being, it might be difficult for your dog to understand why he has to be in a crate in a different room than you. If it used to work for 1 or 2 hours per day and now your trying 3 hours per day and your dog starts to hate his crate all of a sudden, then this is too much. Step back to the amount of time per day that worked. Also, wear your dog out before you crate him. A tired dog is a happy dog and it will be easier for him to relax. It’s possible that his need of exercise changes over time. So try to do some more before his next crate hour and slowly increase the time he’s spending in it.

Another possible reason is that you’ve only crated your pup when you were in the same room, so far. Now you wanna go one step further and also leave him in his crate while you do the groceries. And all of a sudden your dog seems to hate his crate and doesn’t wanna go in there anymore. That’s a pretty clear sign that your doggo suffers from separation anxiety.

Some dogs try to test their boundaries. They might have found their crate ok but then one day, they decide, ok, I’m done with it and start disliking it. How did you react? Did you immediately jump up and try to calm him? In that case he probably learned that he gets attention when he’s being crazy. Therefore he’ll keep doing that because he loves getting attention. It’s the same like one of the reasons why he might get excited in the car.

This asks for counter conditioning as well. Just as with bad association, because he associates excited behavior with getting attention. 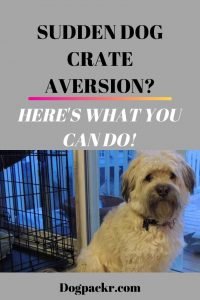 6. Other dogs/cats went in

This is another possible reason. Dog’s sense of smell is incredibly strong and they will immediately smell if another animal has been in their crate. If they’re not used to having other animals in the house, this might freak them out and hence could be the reason why your dog hates his crate all of a sudden.

In this case your best bet is to wash everything thoroughly as well. Your dog will probably still be able to smell the other dog or cat. But if you also put some of his toys or other familiar things inside, he should accept it as his nest again.

Maybe your four legged friend doesn’t wanna go in his crate anymore because it’s uncomfortable or because something in there hurts him. Baloo is also a real princess when something’s lying on his bed. He sometimes takes part of his food and deposits it on his bed. But then he doesn’t wanna lie on it anymore. He’s a star 😉

Make sure that there is nothing that could be painful, such as metal bars sticking out. Also make the bottom nice and soft. Maybe add another pillow or try a thicker dog bed. And if you have a diva like Baloo, take everything that’s lying on his bed and put it to the side.

Has your dog maybe unintentionally soiled his crate or thrown up in it? If you figure out any strong, unusual smells, this could be what disturbs him. Dogs would never soil their nests if they have a choice. But maybe it was really urgent one night and of course, he can’t go out of the crate to do his business.

Wash the crate and the dog bed thoroughly. When you put it back in place, also put something familiar, like a plush toy or another of his blankets inside, so that it smells familiar.

9. Reasons due to his age

Older dogs start having a weaker bladder. If they have to stay in a crate during the night it’s possible that this was fine for a few years. At a certain age, your dog might fear that he can’t make it outside on time. Or worse, he already had to pee in his crate because he actually had to go at night.

For an older dog, joint problems could also be the reason that he’s not comfortable in his crate anymore. If you suspect that your pup has some health issues, it’s best to consult your vet about it.

If he only hates his crate at home all of a sudden, is it absolutely necessary to crate him? For instance in case you let your dog sleep in a crate as a puppy to potty train him and keep him from destroying your furniture. That’s a totally valid reason. But now your pup’s maybe 5 years old, so does he really still need it?

For the car crate of course you can’t compromise so try the other options.

Has your dog ever started to hate his crate all of a sudden? What helped in your case? 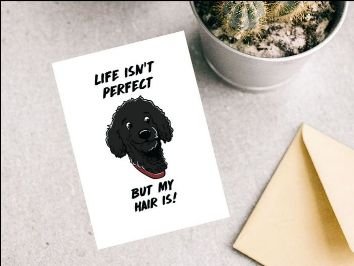