Before I took Baloo on his first flight, I was wondering if dogs could actually also have some sort of fear of flying. This is why I’ve done some research and here are the results.

Short answer: Just as humans, dogs can develop numerous anxieties or phobias. And just as humans, dogs can literally be afraid of anything. Of course, dogs don’t experience the same kind of fear of flying as people do, since they don’t know that they are actually in the air and don’t fear that the plane will crash. But they can be afraid of the experience (they sense that something is happening), their crate, the air pressure, the smells or sounds. No matter what exactly a dog fears about flying, it will scare him, as soon as he gets on a plane.

How does a dog develop fears or anxieties?

A dog usually develops a strong fear, anxiety or phobia of something if he had repetitive bad experience with it, e.g. got hurt physically or emotionally or didn’t know what was going on. Usually, one single event isn’t enough to trigger an anxiety but it is still possible. Another possibility is a lack of early socialisation which can lead to the dog being afraid of everything new. Dogs go through a critical phase of development between 8 and 16 weeks. Everything they experience during this time is sort of set in their brain, be it positive or negative. Check out Petmed’s article for more details on extreme fear and anxiety in dogs.

It is important to find a good balance to socialize your puppy during this time. If you are too protective and don’t expose him to any new experience, object or person, he will have a hard time later and will most likely be afraid of new things. If you exaggerate it, on the other hand, and expose your puppy to new things without a break, he will be overwhelmed which can equally lead to phobias. Dog schools and especially puppy kindergartens are a perfect way to introduce your pup to new situations, dogs and people. Another really important factor is to get him used to being in a crate. If he learns that a crate is a comfortable place to be in, he is much more likely to like experiences where he has to be in a crate, such as flying or car riding. I will explain you in a minute, how to crate train your pup.

What are the symptoms?

Dogs communicate mostly through body language. If a dog is scared, he can show different symptoms. The most common ones are:

The signs can be very different depending on your dog. And your dog can show the same signs due to other reasons. Try to observe your dog in different situations and you will find out what signs your dog shows when he is afraid.

Possible factors of fear of flying for dogs

This depends a lot on if your doggo can fly in cabin or if he has to fly in cargo. Most dogs are much calmer if they are close to their owner. Baloo, for instance, is very fixated on me. So if he’s with me and I’m calm, he’s calm, too. Luckily, he is small and light enough that he can fly in cabin, I think flying in cargo would be too stressful for him because he has a natural separation anxiety. So we always have to kind of “retrain” this whenever we are in a new place. Since we can’t practice this on an airplane, I wouldn’t want to let him fly in cargo. But even if your pup can fly in cabin, he can be afraid of being in a confined space or be stressed by your emotions.

If your dog isn’t certified as a service dog, he always needs to be in a crate, regardless if he flies in cabin or in cargo. In cabin he can also be an a closed pet friendly bag or soft carrier. If your dog sees his crate for the first time when you take him on a flight, it is very likely that he won’t have a pleasant experience. Since he isn’t used to being in a crate, he might want to break free, he might feel abandoned and will generally not know what’s going on. In case your doggo is afraid of his crate, the deeper reason might be separation anxiety. Especially if your pup has to fly in cargo this fear is legitimate and should be treated well before you take your doggo on a flight. Here’s a really good guide about separation anxiety and how to treat it.

The fear of loud noise is one of the most common among dogs. The best possible thing you can do is expose him to all sorts of noises during early socialization. This way he’ll get used to our world being noisy and won’t freak out if he hears the airplane engines start.

New smells usually only stress your pup if they come in addition to something that he is afraid of, such as separation or loud noise. Usually, dogs love to sniff unknown areas and find it really interesting to explore with their nose. So if your pup feels comfortable in his crate and isn’t afraid of loud noise, this shouldn’t be an issue.

Dogs are very sensitive creatures and they can definitely sense a change of air pressure. Unfortunately, there is nothing you can do about this. Like smells, this shouldn’t bother your pup too much, though, if he’s used to his crate, used to noise and doesn’t suffer from separation anxiety.

If your dog can fly in cabin with you, he will observe you closely. Dogs can sense your emotions and how you feel, a bit as if they could read your mind. Have you ever observed that your dog is restless when you are tense? I can observe this with Baloo all the time. He’s probably more sensitive than the average dog. He will sense even the smallest bit of nervousness, stress or fear and will react immediately by being restless and trying to protect me (which generally is a very big help, of course ;)). So if you have a fear of flying, it is very likely that your dog won’t like it either. He feels that you feel uncomfortable and hence associates being on an airplane with stress.

How to help your dog overcome his fear of flying

The best thing you can do is to prevent fears from coming up in the first place. Your doggo should be well socialized. If you have done that, it is fairly easy to get your pup used to new situations, which I will show you in this section.

In case your dog has already developed an anxiety, there are a variety of different opinions on how to treat it. What works best in my opinion is to reward the right behavior. This means that you expose your dog to whatever he’s afraid of and always reward him with praise or treats if he’s getting only a little bit closer to the scary thing.

The most common sources of fear are your dog’s crate, fear of noise and separation anxiety. I recommend putting most of your training effort into crate training. Once your pup likes his crate, you can start to practice leaving him alone in his crate for a few seconds and then extend it gradually. Once this works fine, you can expose your dog to different noise while he’s in his crate.

Crate training is absolutely essential! Your dog has to feel comfortable in this confined space where he will be flying in. In my experience, dogs will love their crates, if properly trained. They will even want to use them as a sleeping place when they don’t have to. A confined space will give a dog reassurance and comfort him. He feels safe in his little place so he can curl up and relax. That’s exactly what we’re looking for.

In the best case scenario, you can get your dog used to his crate during socialization. If this wasn’t possible it can also be trained later.

As a training method I suggest using treats and giving your pup enough time.

Step 1: Put the crate up

First, just put the crate up somewhere at home and let your dog explore it. Most dogs are naturally curious and will want to check the new thing out. Once your dog got used to the crate being nothing dangerous you can put his blanket or pillow inside. This way he might go inside by himself since he knows his blanket or pillow and feels comfortable on it. If he doesn’t want to go inside, yet, don’t force it and take his blanket or pillow out again after a while so that he can rest on it in its normal place. Then repeat it a little later.

If your dog has shown no signs of fear of the crate while it was standing there, you can go one step further and actively bring him to go inside the crate. Put some of his favorite treats (I mean something he really can’t resist) inside the crate and let him get it. If he gets it without any signs of fear you can let him sit or lie down in the crate and only then give him the treat. Once this works fine, go one step further and let him sit or lie in the crate for a bit longer before you reward him. You gradually have to extend the time, before he gets his treats.

If your pupper stays in his crate for several minutes without showing any signs of restlessness, close the crate for a few seconds and stay next to it. Then again, reward him. Next, extend the time of the closed crate but still stay in the same room.

Step 4: Leave him alone and make some noise

Once he stays calm for several minutes inside the closed crate, go outside of the room for a few minutes. Then reward him again. Keep extending the time and gradually work it up. At last, you can make some noise in a different room and them reward your dog for staying calm. Then you can go closer and make some noise again. If he managed to stay calm during all of those steps, your pup should be ready for flying. But always make sure your dog is calm before you go to the next step.

Be aware that crate training can take up to several weeks to be properly trained. So start well in advance. Some dogs naturally love being in crates or carriers, so training will be much faster. But it is always best to calculate enough time.

4 thoughts on “Can a dog have fear of flying?”

link to Why Is My Dog So Hyper at Night?

Hell, I know those hyper doggy nights! My Mini Poodle Baloo used to be hyper pretty much all the time when he was younger! And the night was no exception. I have no idea where he got all... 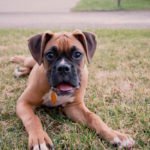 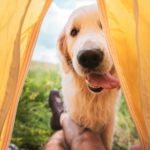