Is your puppy throwing a tantrum every time you put him in his crate?

That can be incredibly annoying an tiring. And trust me, I’ve totally been there! When my Mini Poodle Baloo was a puppy, tantrums were a daily thing he displayed on repeat, especially in the crate!

At that time, I had to write my Master’s thesis so I needed regular focus time. That’s always when I put Baloo in his crate and he was not at all happy with that…

Luckily, there are ways to help your pup love his crate more. It took me quite a while to figure this out. So, hopefully this will help you see results much faster.

Why Is My Puppy Throwing a Tantrum in the Crate?

Your puppy’s crate is supposed to be a great tool for both of you. For one thing, it’s supposed to be a place where he knows he can go to relax and decompress. For another, it’s somewhere to put him at night when he’s sleeping so he doesn’t wander around the house and get into trouble.

But if your puppy throws a tantrum every time he goes into the crate, then what are you supposed to do?

Don’t worry—you can help your dog learn to love his crate. But first we need to go over why he’s having tantrums in his crate at all.

He Isn’t Used to the Crate

Your puppy’s crate is supposed to work with his den instinct. In the wild, dogs and wolves will instinctively seek out small, confined spaces where they can go to feel safe.

But while some puppies seem to understand that right away, other puppies have a harder time tapping into that instinct. For those puppies, being put in the crate can be confusing. They don’t understand why you’ve put them in the crate when all they want is to be hanging out with you!

In this case, it’s just a matter of working with your puppy to get used to the crate. We’ll get to that in a minute.

If you only just got your puppy and this is his first time away from his mama and littermates, then having to be alone in his crate can be really scary.

You’d feel scared too if someone took you away from your family and then tried to put you in a little box for the night!

If your puppy is scared, just be patient! Work hard on making positive associations with the crate, so that he learns that it’s a safe, comfortable place for him to be.

Plus, take the crate in your bed room next to your bed – at least in the beginning. Having you close by will help him feel safer.

He Suffers from Separation Anxiety

Separation anxiety can be really challenging to deal with for both the dog and the dog parent. Dogs who have separation anxiety may be destructive when they’re left alone, or they may bark or howl.

Many owners feel guilty that their dog has separation anxiety. The important thing to know is that if your dog has this problem, it’s not your fault.

He Needs to Go Potty

Your puppy’s bladder is tiny! Depending on how old he is, he may need to go for several bathroom breaks during the night.

Of course, there are always exceptions and some puppies can hold it much longer even at a young age. This will require some testing.

Something Uncomfortable Happened in the Crate

Maybe he’s a rescue puppy who’s had bad experiences in the crate in his past. Or maybe you just didn’t know how to crate train him properly at first! Either way, if something uncomfortable happened to him in his crate, he’ll be less happy about going in.

You might need to work a little harder to build up more positive associations with the crate, but it is possible!

We all know puppy tantrums are hard to deal with, but how do you help your puppy stop? Here are a few things to try.

The very first thing you should do is make sure you’re crate training your puppy right! Being proactive will help prevent tantrums from arising in the first place. While he may have a few during the beginning stages of crate training, training him right will definitely reduce the amount!

If you’re not sure where to start, here’s how to crate train a dog easily in 13 steps. You might also want to check out a good crate training schedule for a puppy.

Always Take Him Out Before He Starts Crying or Barking

Your puppy should never be the one waking you up for bathroom breaks! If you’re only letting your puppy out when he’s crying or barking at you, that only shows him that throwing a tantrum is what gets him out of his crate.

Remember, your puppy can hold his bladder for approximately the number of hours equal to his age in months plus one. So, you may need to bring him out for a few nighttime bathroom breaks.

Set an alarm on your phone, take your puppy out of his crate, and bring him out for a bathroom break without speaking to him. His nighttime potty breaks should be as unexciting as possible!

The same is true during crate training, especially if he’s suffering from separation anxiety. Slowly build up the time he’s in there and always take him out before he starts getting vocal.

It’s hard to ignore something so loud! But if you want your puppy to learn to go into his crate nicely and be calm inside of it, then it’s really important that you don’t give in.

It’s just like a toddler throwing a tantrum. If you give in to what your toddler wants, that only teaches him that throwing a fit is how he gets his way.

So instead, just ignore your puppy’s tantrum. You can walk into a different room if you need to. Only go back in and pay your puppy attention when he’s calm and quiet.

Only Let Him Out When He’s Quiet

Just like ignoring the tantrum, letting your puppy out only when he’s quiet teaches him that that’s the best way to get out of the crate.

If you let your puppy out whenever he barks or cries, that’s just teaching him he can leave his crate by doing exactly that!

Wait until your puppy is quiet for at least a few seconds before you let him out of his crate.

Some dogs have trouble settling down if they can still see outside of their crates. They might look around and feel upset that they’re stuck in the beds while there’s so much to do outside! Dogs sleeping in wire crates may have an especially hard time.

You can try covering the crate with a blanket or a sheet to make it darker for your puppy.

You can also purchase a crate that’s already covered. If you’re in the market for a new crate, here are 6 of the best crates for dogs to sleep in.

If you thought relaxing music and white noise was just for humans, think again. Quiet music can help drown out sounds your dog is hearing at night, while also being very soothing and peaceful.

You can find plenty of options for white noise and quiet music online. Just search “white noise for dogs” on YouTube and you’ll find tons of videos! And who knows—maybe the music will help you sleep easier too!

When dogs chew and lick things, it releases a hormone called serotonin in their little brains. This hormone is responsible for a lot of things for both humans and dogs. One of its major benefits is that it helps make you feel calm and relaxed.

Giving your dog something to chew on and lick will produce this serotonin and help your dog calm down in his crate. It also gives him something else to do with his mouth aside from barking and crying at you!

Give Him One of Your Worn Shirts

If your dog has separation anxiety, or even if he’s having trouble being on his own for the first time, giving him something that smells like you may help.

Grab an old t-shirt that you’ve worn recently and put it in his crate with him. If he’s feeling anxious about being away from you, having something that has your smell could help him feel closer to you and to relax.

Your puppy is so amazing and you love him so much. But it can be really stressful if he throws a tantrum every time you put him in his crate.

Luckily, there are ways you can teach your new best friend to love his crate! It’s all about building positive associations by crate training him properly, and making sure you’re only letting him out when he’s calm and quiet.

With a little work and patience, your puppy will learn that his crate is a great place for him to settle down in. And soon enough, both of you will be able to sleep through the night! 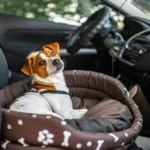